Another busy day in the books. Next up: NATIONAL CHAMPIONSHIP GAME

Well another busy day is in the books, and what a week it has been. Here we are on the eve of the National Championship game. What a ride it has been and we get to put it all on the line in front of millions of people on national television. It has been a pleasure to work with the great people at CBS to help them get ready for tomorrow's broadcast. Speaking of which, that's how the day started out. We met with CBS producers this morning for some pre and in-game graphics for tomorrow's broadcast this morning.

Following the photo shoot with the players, head coach Tom Billeter met with the media for his press conference prior to the national title game. You should have some time yet to catch that on Periscope:

The team then held practice on Friday afternoon at Dr Pepper Arena. NCAA.com has a preview of the National Championship game:

Following practice coach Billeter and players met with local media and MudMile. Check out the most recent video of the Elite Eight trip here:

Watch all the videos from this past week HERE.

After the taping of the video above, Daniel Jansen took a shot at interviewing teammate Casey Schilling. Look for that video on our social media outlets Saturday morning. 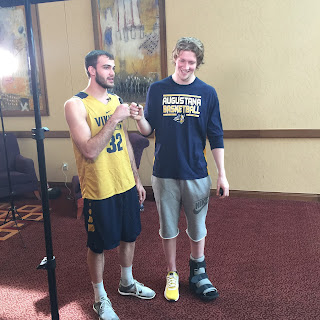 With that, I wish you good night, and a happy national championship game eve. Whether you're here with us in Frisco, or back home in Sioux Falls, or anywhere around the world, cheer loud and Go Vikings!